The 8 Best Places for BIG Food in New Hampshire! 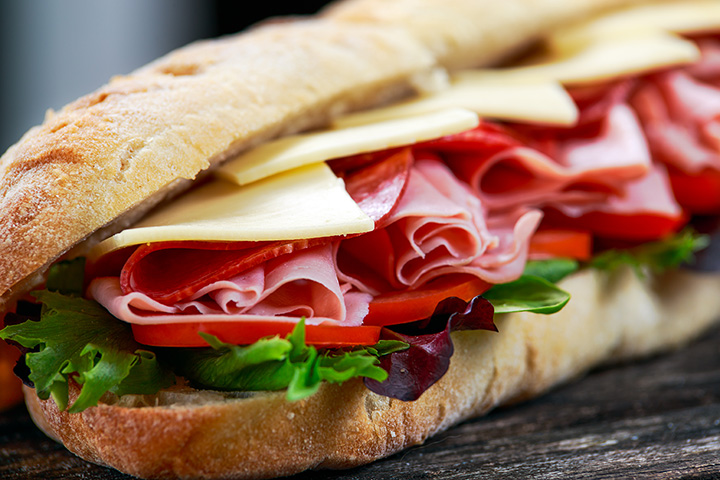 You’ve seen the ads. “Eat the whole thing and it’s free!” Usually the “whole thing” involves consuming an extra-large portion of something the restaurant is known for. And these challenges aren’t easy for the average person. Not many people have appetites that allow for polishing off a five-pound burger or several dozen chicken wings. The following New Hampshire eateries have challenges and really big food. Check one out—even if only to watch the guy in the next booth over try to win a challenge.

Even though Chez Vachon only serves breakfast and lunch, they’re known for some specialties. One of those specialties in poutine, and with it comes a big challenge. Those who can polish off a five-pound tray of the French fries covered in gravy and cheese curds gets their photo added to the wall of winners.

The tiny town of Rindge is known for some not-so-tiny sandwiches. Sandwich Master is known for some delicacies between bread, as well as for their 10-pound sandwich they call the Nutcase (Yes, you might have to be one in order to eat the whole thing!). The Nutcase is made up of chicken fingers, hamburger, mac and cheese, French fries and more. If you eat the whole thing, you’ll be awarded with a Sandwich Master t-shirt.

The Tuckaway Tavern offers its guests a big meal—and it has a big payoff, too. If anyone can finish off their four-cheeseburger meal—with French fries—they won’t just get the meal at no cost, they will get a $100 gift card to the restaurant and/or butcher shop, too. Do note, that the burgers here aren’t of average size. Some folks have difficulty polishing off just one!

Alley Cat Pizzeria is located on a little side street in Manchester. Once you’ve tasted their pizza, you’ll agree they’re the best around. In addition, they claim to have the biggest pizza in the entire state of New Hampshire. Order one the next time you’re hungry. But take it to go, as there will likely be leftovers.

While the name “Ava Marie Handmade Chocolates” might not scream “ice cream,” those who have indulged in their ice cream certainly will on their behalf. Their Mount Monadnock Sundae is comprised of 35 scoops of their delicious ice cream, along with caramel, hot fudge, granite chocolate rocks, a chocolate moose and lots and lots of whipped cream. Definitely made for sharing, this giant sundae will set you back almost $40.

The Woodstock Inn Brewery offers up a challenge for those who think they can eat two big burgers in one sitting. Their “Double Death by Burger” meal is two 1.5 pounds cheeseburgers. Those who can polish them off gets their photo on the Wall of Fame, as well as a t-shirt.

Anyone who finishes the meal at KC’s Rib Shack known as the Feedbag Shovel must have a bottomless pit for a stomach. Six pounds of barbecue—including ribs and chicken—as well as two side orders and some cornbread—makes up this enormous meal. Customers who finish it in a half hour get it for free.

At What’s the Scoop?, customers can try their hand—or really their mouths and stomachs—at their WTF. Now, don’t worry, these three letters don’t mean what you think they mean. In this case, WTF means “way too full,” and the sundae that takes that title consists of nine scoops of delicious homemade ice cream, three “wet” toppings (hot fudge, marshmallow, etc.), three “dry” toppings (crushed candy bars, crushed cookies, etc.), whipped cream and cherries. Those who successfully polish off the WTF get a certificate.